skip to main | skip to sidebar

This is the absolute last time I will say it...

There will be no more posts at this address.

Please proceed to www.coloradomatty.wordpress.com and update it in your bookmarks, aggregators and especially links/blog rolls.
Posted by Matty 12 comments:

Below is my first post over at the new site.  Please change the address to www.coloradomatty.wordpress.com...


Finally, I have taken the time and summoned up the courage to end my wavering on the new blog.  The decisions themselves are telling in how I expect to proceed from this point on.  Please notice:


This format has the option of adding and editing additional pages which appear in tabs across the top of the site.  At this point I only have an ultra-brief bio and a page related to Hope Center but in the future this will expand.


The Twitter feed prominently displayed on the top right.  I have already explained that Twitter falls under the category of “micro-blogging” and as such, my thoughts which can be expressed in 140 characters or less will more than likely end up there rather than in the main post area.  You can either join and follow me on Twitter or read my updates directly from this site.


The new address I chose was coloradomatty instead of the familiar coloradogaws.  I intend this to become less a family blog (after all, we are back in the States and communication will be simplified from the Ukraine days) and more of a ‘professional’ production (ridiculous pomposity alert!!!!).  Obviously I won’t get paid for this but my plan is for future content to reflect this directional change.  I’m going to work on getting Sarah to ‘guest post’ after she forgives me for scrapping the old format.


The Hope Center links still exist.  Despite our simultaneous departure from Ukraine and Global Action, I still firmly believe in those ministries and will continue to promote both.


There will be a greater emphasis (though not overwhelmingly so) on politics, current events, faith and history – hopefully with an accompanying improvement in writing quality.  The goal would be to make these subjects compelling, interesting and/or humorous.  Obviously there will also still be posts on family, friends and miscellanea to further liven the mood.


So that’s what this is going to be about.  If you subscribe, link to or follow my blog, please change the address to www.coloradomatty.wordpress.com

I know it's been a while since I wrote an actual post but I ask you guys to wait just a little longer.

From the input I've received online and in person, I am leaning towards one of the themes to which I linked in the last post.  Now I'm just waiting to post until I get my ducks in row on the new site's layout and maybe even solidify my thoughts on the content format.  I plan to be much more intentional on my post content so I want to be prepared when I actually start up again at the new site

I am hoping for a grand re-launch soon... does that sound to pompous for such an insignificant blog?
Posted by Matty 5 comments: 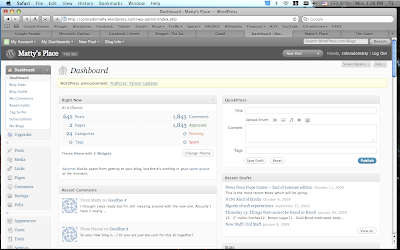 Yesterday I vowed that I would give links to the 2 options for new blog designs that I created this weekend as a replacement for this one.  I imported all my previous posts and comments from here onto both and have played with the formats enough to show basically what the sites would look like after the transition.

They have 2 different addresses, which I am also trying to decide between.

#1 is www.coloradogaws.wordpress.com and it's a 3 column set up.  I like the design but the 3 columns makes the widgets really skinny, especially for Twitter and Recent comments.

#2 is www.coloradomatty.wordpress.com.  It's only 2 columns which makes it seem less crowded.  It also has a new Wordpress only post that I did from my phone (a huge plus in using Wordpress over Blogger).

Be sure to notice that both have tabbed pages across the top which can be edited, stacked (ie. one tab can contain other pages 'nested' underneath), added or removed to provide easier

Check it out and let me know which you prefer and any recommendations you might have for improving either version.  Commenting is mandatory.
Posted by Matty 10 comments:

Our return to Colorado has ushered in a lot of changes.

Some are big - a house we haven't occupied in almost 2 years (which is currently without heat in sub-freezing temperatures), a new job (hopefully soon).

To accompany these changes I am making a clean break from Blogger.

I have set up and begun to manage 2 separate sites (only 1 of which I'll keep) on a Wordpress account and have thus far been very impressed. Primarily, the design is better than anything I've seen for Blogger by a country mile (that's the first time I've ever typed that saying... it's kind of clunky in print). The features a similar but a little slicker and the dashboard is far superior - offering traffic tracking, a quick post feature and easier photo posting. I also won't miss Safari not being able to post URLs in the link boxes in Blogger publisher.


It's hard to see on these pictures (because Blogger won't let me resize them larger like Wordpress does) but here are screen shots of the 2 that I'm working with at the moment. 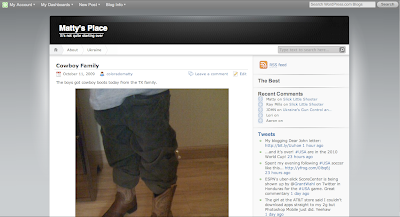 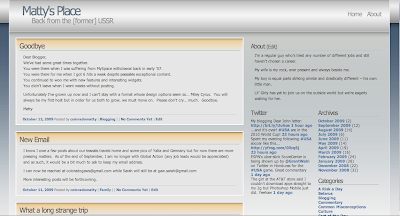 This blog will still be active for a while until I settle on a final Wordpress version.

What I used to think